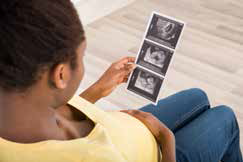 Thanks to M-HeLP, Self-Employed Mom Gets Healthcare

“Ms. Daniels ” is a single mother with a baby due in late March. Last fall, she was twice denied Medicaid coverage for her pregnancy. “When I first applied for Medicaid, I had just found out that I was pregnant and was also looking for housing.”

Ms. Daniels is self-employed with a business so new that she has not yet had to file taxes. And, as many now do, she promotes her business on Facebook. However, when she applied for Ohio Medicaid, a case worker saw her Facebook page, decided that she was lying about her income, and denied her application. Ms. Daniels applied a second time, submitting a self-declaration of income with her application. Again, the case worker used the Facebook page to decide that her income statement was untrue and that she was not cooperating with the verification process. Ms. Daniels was denied coverage a second time.

“I was very upset by the denials. I applied again and got the same case worker who I felt wasn’t treating me fairly! She called me inquiring about Facebook posts and then told me she was denying me for fraud. During this whole process I was not getting prenatal care because I couldn’t afford it. I was very stressed out and ended up going to the emergency room toward the end of this ordeal.”

Then, M-HeLP was launched. A social worker at Good Samaritan, trained by M-HeLP, referred Ms. Daniels. Initially, she was very skeptical as to what M-HelP could do for her. Our advocate, Deanna White investigated the situation. She helped Ms. Daniels reapply for Medicaid, and submitted an income chart based on data from her appointment book. As a result of Legal Aid’s intervention, Ms. Daniels was approved for health care coverage. Now, she is looking forward to welcoming her baby into the world.

“Legal Aid gave me very specific and clear instructions on where to apply, and what I’d need to verify the information on my application. All I needed was internet access on my phone to fill out the application and they took care of the rest. It was so quick! I didn’t even have to physically appear at Job and Family Services to do any interviews, just received an email that I had been approved,” stated Ms. Daniels. “I highly recommend Legal Aid, they are professionals and will make sure that you’re being treated fairly.”